A Scene From A Book 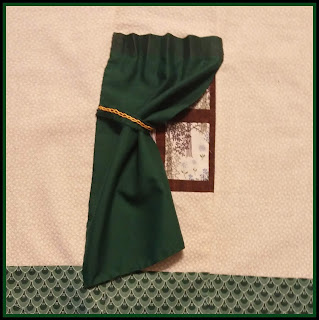 This is how far I got on the May 1 theme before I had to get serious about packing for the move.  Can you tell it's the scene from Gone With The Wind where Scarlet gets the idea to use the drapes to make a new dress.  When I think about it, my mind sees the scene from the movie with Scarlet wearing the dress and hat. Missing here is Scarlet herself.  She is packed away in the project box waiting to be completed.

Gone With The Wind has always been one of my favorite books as the movie is too. I didn't read the sequel book because I just didn't think a different author  could capture the spirit of GWTW.

Being of the Baby Boomer generation, I grew up watching old movies.  I loved all the old actors especially the dashing Clark Gable.  I read ALL THE TIME.  One of the things I loved best about the book was exploring each character's personality.  What influenced the women to be the way they were.  I couldn't identify with any one of them.  There wasn't much about Scarlet for me to like.  My favorite line from the movie anyway was Prissy  saying "I Don't Know Nothing About Birthing Babies".  It's been my reply to many questions I have been asked.

I don't have much more to say about this piece.  My first start on this Challenge was Stephen King's IT.  I don't recall why I switched gears to GWTW. I didn't get stalled on it, but like a lot of people around the world right now, we had a lot of illness at home these past 3 months.  Terry's illness looked a lot like C19 virus. He really did think he was going to die.  I was then sick for about a week, but nothing as bad as Terry.  We both would have been tested if there was a test to be had here at the time.