Scene From A Book

When I first saw the theme Scene from a Book, I thought it would be a snap. I read almost as much as I sew. Well, actually sewing wins out, but I do love to read. I read the theme incorrectly at first, thinking it was a phrase from a book. My idea for the theme popped into my head, and then I realized it was supposed to be a scene from a book. Hmm.

I pondered much longer than I should have. I knew I wanted to make something from a scene in one of Louise Penny's books. She writes wonderful mysteries that take place in a tiny hamlet in Quebec, a place called Three Pines. The characters from Three Pines that the reader gets to know are an eclectic mix of individuals and personalities. They all get along, even when they disagree with one another. Three Pines is an idyllic place; one that I dream about in these COVID days.

In one particular scene in her first book, Still Life, the author spends one scene describing a floral arrangement. It is so odd, I couldn't resist. I had to create my version of this. To be honest, I'm not satisfied with my interpretation, but it will have to do. Maybe someday I'll make a second version.

In the scene, the usual gang of Three Pines is gathering for a communal meal. Myrna, the librarian, has just arrived at the home of Clara and Peter (two resident artists in the town). Clara is watching her friend coming through the door. Myrna is not a small woman, according to Clara, and as she comes through the door, she "drags in" a flower arrangement. The arrangement is described as having oak leaves, maple leaves, bullrushes, a McIntosh apple branch (with an apple still attached). As if that weren't odd enough, the arrangement also contains a kielbasa and The Collected Works of W. H. Auden.

I chose to make my quilt in raw-edge applique, because I envision this flower arrangement to be rather rustic and messy. My quilt is quite rustic and simple. I waited too long to get started, so I wasn't able to make it as elaborate as I would've liked. 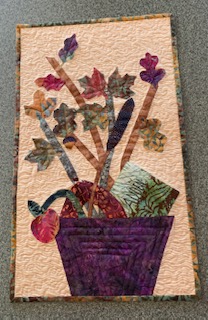 I managed to get the apple branch in, with one apple. 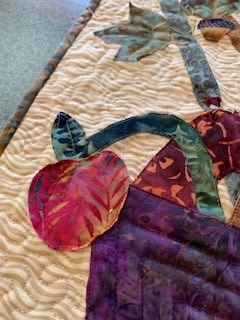 Then I added in Auden. Had I put more plants around it, I would've hidden the book. As it was, I just tried to make it look a bit camouflaged. 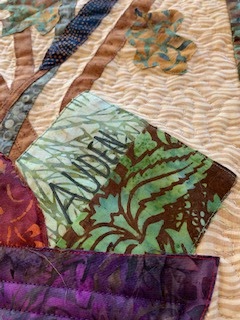 And of course I snuck in the kielbasa - it was why I wanted to make this arrangement in the first place! 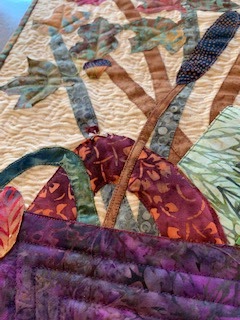 I even padded the kielbasa a bit, although you can't see it in the photo. All that's missing are the copious amounts of various herbs.

I stitched some veins in the leaves and then a quick stipple in the background and declared it finished.

It certainly wasn't what I had thought I'd make for this theme, but it was a fun challenge.

Looking forward to the next!

Wendy
Posted by piecefulwendy at 00:00 13 comments:

Email ThisBlogThis!Share to TwitterShare to FacebookShare to Pinterest
Labels: A Scene From A Book
Newer Posts Older Posts Home
Subscribe to: Posts (Atom)