I really apologise for being so late posting, and, even now, I can only show you a flimsy!

When I saw our subject was “Nature” I knew I had this photo I’d taken in our garden ..... 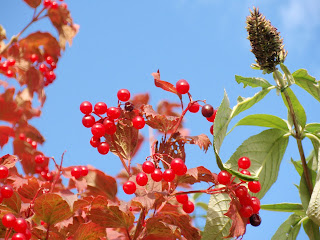 which I wanted to interpret into a quilt. I wasn't sure how, until I happened to see a photograph of a hibernating dormouse on the WWF website! I had visions of said dormouse dreaming of its food ..... and I checked they do eat berries and flowers, although whether my plant is the right type I don’t know.

I tentatively drew pictures from both photographs onto tracing paper, outlined them with a black pen, and then, with the help of a light box (a rather Heath Robinson affair of a tupperware box and small torch, torch held in place in the box with some drafting tape, and box held together with an elastic band!) pencilled the pictures onto calico (oops I said muslin in my original description .... I mis-spoke!).

Previously I had only painted fabric with Acrylic paints, and then it was only because I needed fabric of a specific tone to go with whatever project I was working on.

For this project I started with a “new to me” idea ..... fabric paints, and then decided to paint in the style of watercolours. Not such a clever idea in so many ways! I haven’t even painted watercolours on paper before, but I certainly have more idea “how to” now. I guess it did me a favour, as, if I hadn’t started this project, I think I might never have used the fabric paints and they would probably have eventually just dried up in the cupboard!

I’ve also painted binding for this project as the original fabric I was going to use was much too dark ..... I just hope it looks the way I think it will when it's finished.

I ironed all the fabric after painting so hopefully all the paint should last, only time will tell. 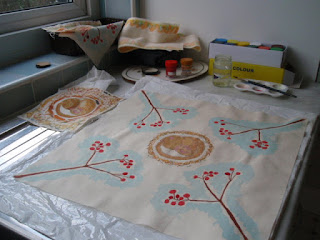 I still need to persuade my sewing machine to let me stitch free motion to embroider my quiltlet, but for now I will put this on hold to consider our next project.

Do visit me, FlashinScissors, to see a few pictures of my process. See you later!!