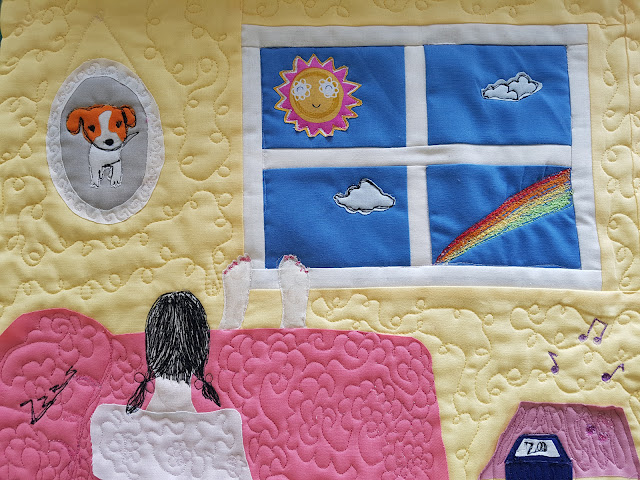 When it came to picking a theme to put into the challenge list I chose "Raindrops keep falling on my head!"  It  is one of my favourite songs that always manages to give me a bit of a lift and puts a smile on my face like Three Little Birds by Bob Marley or Jason Mraz "I'm Yours".

Still this was a bit of a head scratcher as to what to make.  I had to have a think about it and remembered the reason I chose the song as a theme in the first place. Raindrops Keep Falling on My Head is a song by B.J Thomas that was used as the theme song for Butch Cassidy & The Sundance Kid.  I remember the scene where they were cycling trying not to fall off the bike and the music playing over it as they wobbled around the yard.  I used to watch Westerns with my Dad.  We loved them and had no problem re-watching movies and staying up til 4am on New Year's Eve watching Once Upon a Time in the West, or the Big Country, Magnificent Seven, High Noon, The Searchers...

Seeing as the song is so personal I thought I might do a self portrait in thread.  Originally I thought about a collage of different fabrics but couldn't find enough of what I wanted.  So in the end I went for a cartoon style with sketch stitching. 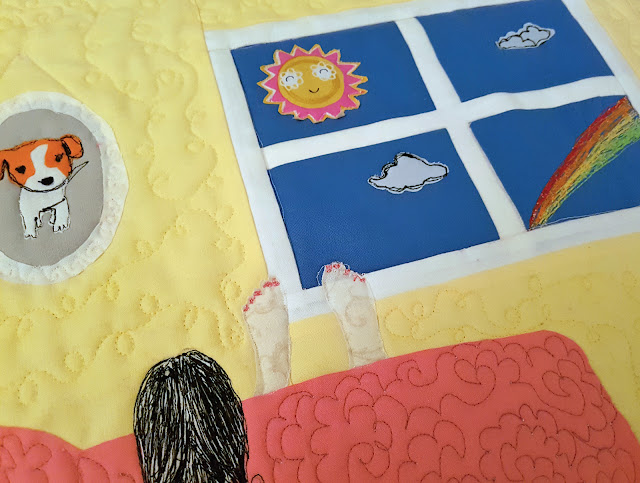 So that's me sitting up in bed with my feet sticking out (I'm 5ft tall so that's the ironic bit!).  Gordon is snoring his head off beside me. Charly our 12 year old Jack Russell has a habit of hiding away on our bed when she can so not having enough room for her on the bed, I have her framed on the wall (artistic licence!)  I'm trying to do the healthy thing of getting up early for a morning routine but I have a habit of hitting the snooze button so there's the alarm going off and me happily ignoring it!

"So I just did me some talking to the sun,
I said I didn't like the way he got things done,
Sleeping on the job,
Those raindrops are falling on my head,
They keep falling!"

So there is a bit of smiling sleepy sun about to wake up.  Clouds in the distance with their silver linings and of course after every sun shower there is a rainbow!

"But there's one thing I know,
The blues they send to greet me,
Won't defeat me,
It won't be long,
Til Happiness steps up to greet me"

It's been a difficult time lately with managing workload, voluntary committee work finally coming to an end after 3 1/2 years and I had a bad back for much of last year.  So I found myself worn out, feeling stressed and wired with too much going on.  It's been a healthy, take a step back, prioritise and let some things go moment for me.  I'm loving Spotify and happy cheerful music gets me through the housework and cleaning the kitchen and I'm coming back to myself again and making again so I thought a portrait (is it a portrait if it is only the back of my head?), with me talking to the sun, enjoying the morning, with the rain clouds billowing away into the distance summed all that up.

"Raindrops keep falling on my head,
But that doesn't mean my eyes will soon be turning red,
Crying's not for me,
Cause I'm never gonna stop the rain by complaining
Because I'm free...

I didn't quite get it finished so it's unbound, but somehow that feels right too. In a week that had Avengers: Endgame, Game of Thrones: The Long Night (aka Battle of Winterfell), new home heating boiler installed, Birthday lunch for a friend, Storm Hannah blowing down a fence in the garden and a busy work week, I'm forgiving myself for that! 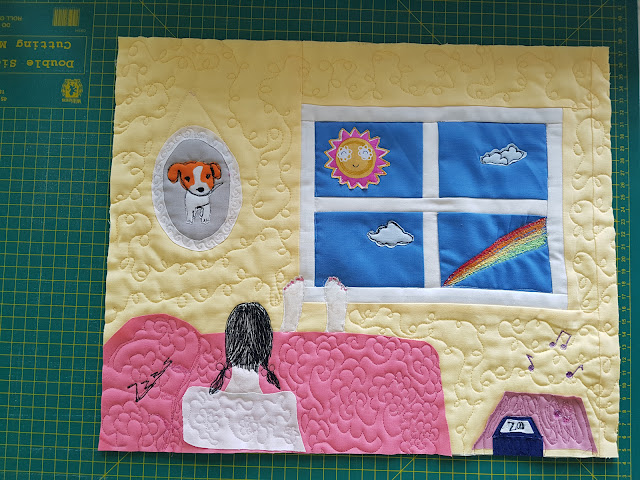