When the theme Animal Kingdom was chosen, I spent days trying to figure out what to create. This happens with each theme. I think I need to do something on a grand scale - it takes me a few days to come to my senses. I considered quite a few different animals - the blue-footed booby almost won out (because they are so darn cute!). In the end, I went with a humble chicken. Ms. Henrietta, however, is anything but humble. Once I settled on this idea, I had a little fun. 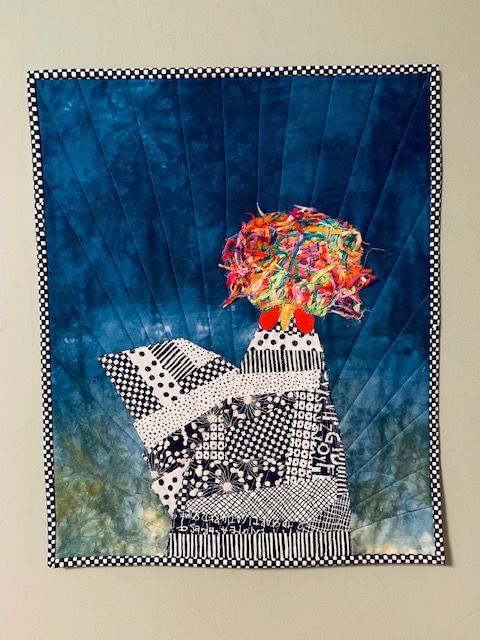 My inspiration for Henrietta is the Polish Chicken, those chickens with the crazy head floof. They bring a smile to my face whenever I see them (I think I might look a bit like that when I get up in the morning). It all began with the black and white improv. My plan was to make the head floof black and white, too, but that was not to be. In order to do that, I needed to find my Sulky Water Soluble stabilizer, which I had tucked away in a spot I was not likely to forget - heh heh. I'm still looking for it!

The head floof (I don't know what else to call it) would have been made by using two pieces of water-soluble stabilizer, a base piece of fabric, and trimmings from cuttings. The trimmings are piled atop the base fabric, then that is sandwiched between the two pieces of water-soluble stabilizer. Then you sew it down with a thread that matches the trimmings, sewing over and over, until you feel that the trimmings are well-anchored to the base fabric. The last step is to wash off the stabilizer and let it dry.

I used raw-edge appliqué for the entire piece, matching the thread. For the body, I stitched around the outline, then stitched vertical "feather-like" lines in the body and tail. You can't really see them that well, but here's a little peek. 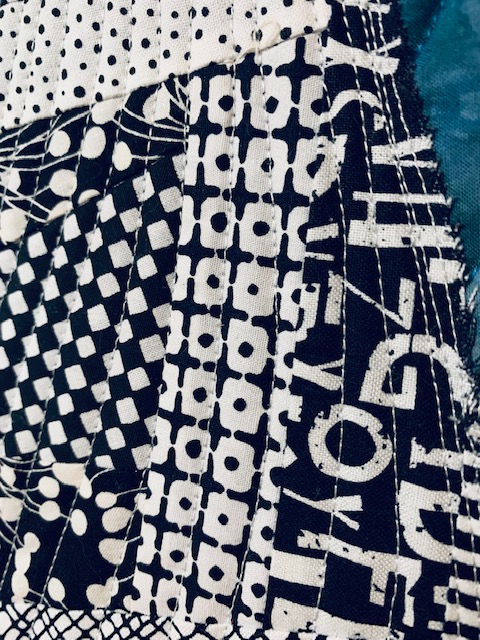 For the head floof, beak and waddle, I just did a simple outline stitch in matching thread. Henrietta has eyes under that floof, I'm pretty sure, but she didn't bother to let me fuss with them.

Here's a photo of that floof, up close. 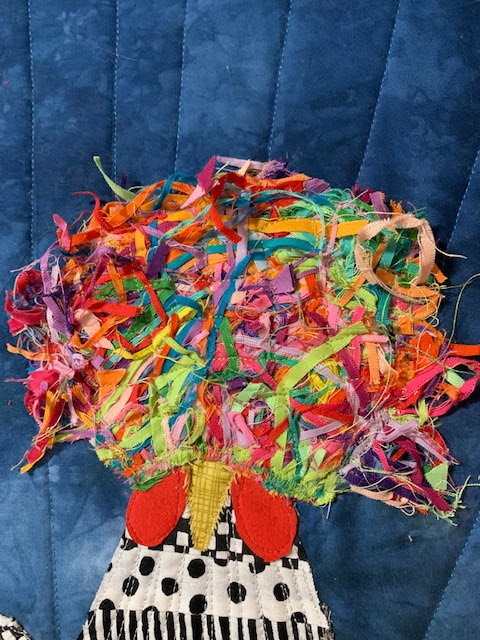 She has quite the floof, doesn't she?! I told you she wasn't any ordinary chicken! Haha! The trimmings are from the cutting for my Postcards from Sweden quilt; I couldn't bear to throw the trimmings away, they were so bright and fun. Who knew that I needed to save them for Henrietta?

I pondered how to quilt her. In the end, I decided to use the same quilting idea as I did for my Sundance the Rooster quilt (I'll link all of these past quilts in my other blog post). Just simple rays behind her, to show her off a bit. I wanted to main focus to be on her.

For the backing, I used a piece of bright blue Grunge. You can see the quilting a bit more from the back view. 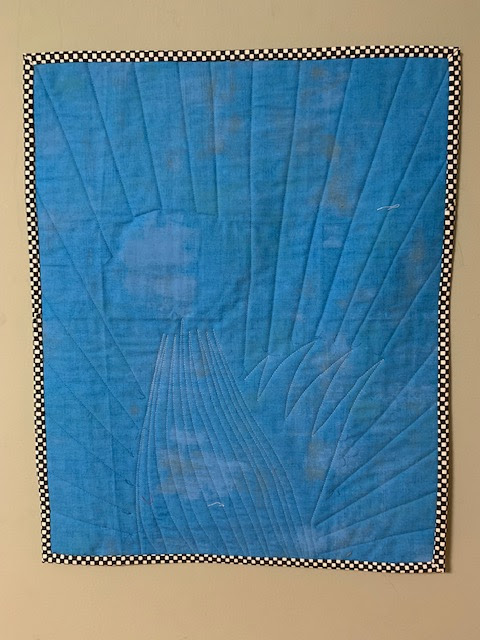 Henrietta measures 16" x 20". All of the fabrics are from my stash. This was such a fun theme, once I figured out what to make!

Posted by piecefulwendy at 13:14