It took me forever and a day to come up with an idea for this challenge. In the end, I went with what I was pondering in the first place (isn't that always the way it works??), although I had to idea it would be in the context of Minnesota.

My idea first began thinking about fractured quilts, and my final project used a little bit of that idea. My inspiration was earthquakes, and then I came across this interesting link from the Minneapolis Star Tribune about earthquakes that have hit Minnesota. Growing up in South Dakota, I do recall one very mild earthquake event that hit my area, but have not experienced any since my relocation to Minnesota.

For my quilt, I decided to take a piece of fabric with a bit of a nature scene that made me think of Minnesota. I traced out the state outline onto SoftFuse and fused it to be back of that fabric. Then I cut the the piece into 1-inch strips. I fused it onto Grunge fabric in a deep teal that made me think of the lakes of Minnesota (since we are the land of 10,000 lakes) in a staggered arrangement, hoping to give the idea of being shaken. I stitched around each strip using raw edge applique with a cream thread. 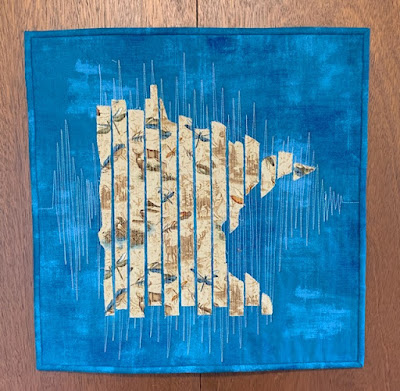 So that was pretty simplistic. I pondered whether I could add anything else, and considered some wording, but in the end decided to go with simple. Here's a view of the back, with the same fabric I used for the state outline. 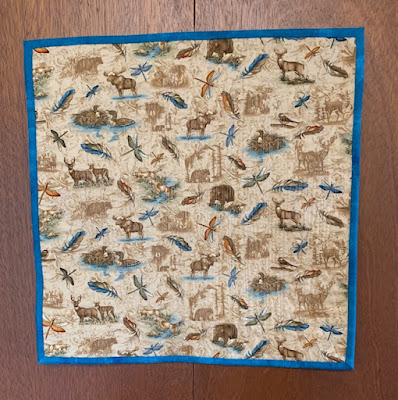 I had a little bit of fun with the quilting, and decided to quilt a siesmometer readout design over the fractured state outline. Thinking it would be a quick quilting idea, but it took me longer than I thought it would. I used a light variegated cream thread, so that it would show against the teal but fade into the state outline. 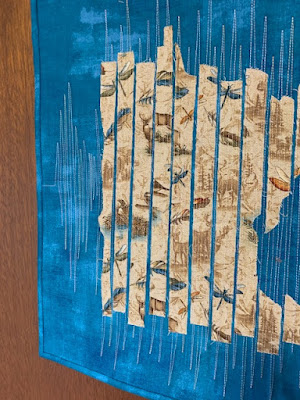 Hopefully you can see that in this angled shot, where the light picks up the quilting a bit better.

I'm looking forward to seeing the other interpretations of this theme. It was a tough one for me!

Posted by piecefulwendy at 13:41

Email ThisBlogThis!Share to TwitterShare to FacebookShare to Pinterest
Labels: A Headline from a Newspaper
Location: United Kingdom