The prompt for the latest challenge was "Opposites Attract." I had a few ideas about this prompt: Yin and Yang, and a few others. I finally settled on making a quilt from a small stained glass art piece I purchased at a gift shop on the Oregon Coast many years ago. I have no information about the original artist. It used to hang in my office when I was a social worker in private practice, and so Tragedy and Comedy were the "opposites" I chose for my piece.

Here's an image of the Tragedy Comedy masks gleaned from the Creative Commons website: 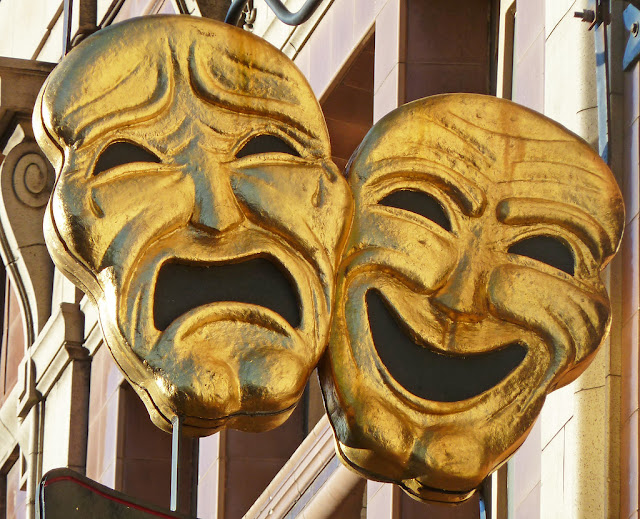 (Image credit: "Tragedy and Comedy" by Tim Green aka atoach is licensed under CC BY 2.0)

There's a good article explaining the history and meaning of the Comedy and Tragedy theater masks. In a nutshell:

[T]heatre masks were used by actors during performances so as to clearly depict emotions to every member of the audience, even one who was sitting in the seats far away from the stage. The large faces added a sense of exaggeration to the actors’ emotions, which helped them convey their emotions to the entire open-air theatre. These masks also allowed actors to play characters independent of age and gender, as all the actors in ancient Greek theatre were always men. Theatre masks allowed them to play female roles with ease. Similarly, one actor could play more than one character with the help of these masks. 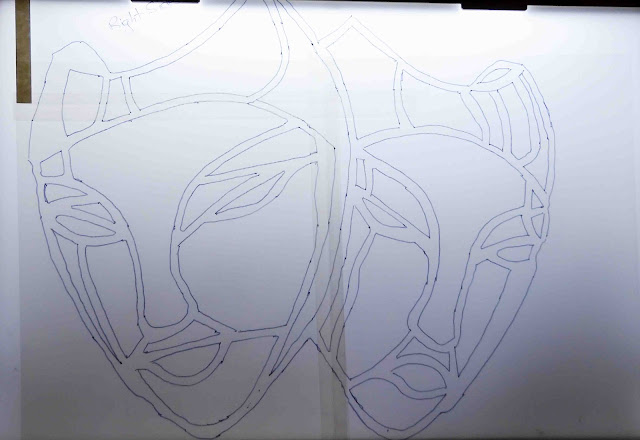 There are other ways to do stained glass applique, but I like the method described in this book: 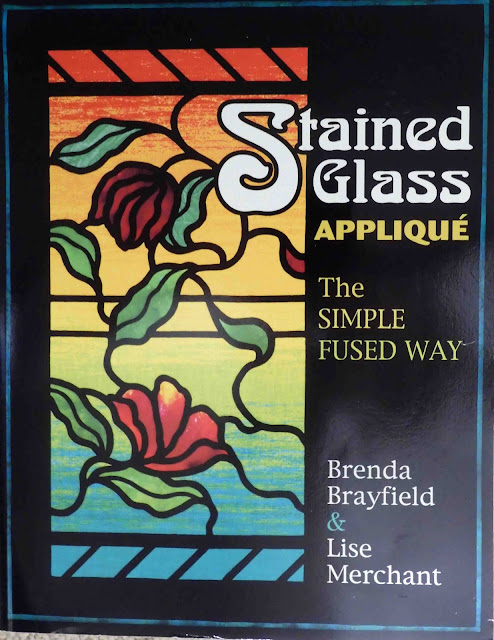 When I had the "leading" portion traced onto fusing medium, the next step was to fuse it to a solid black fabric, and then cut those thin lines. I've done this method many times. When the cutting is finished, it looks and behaves like a pile of spaghetti. 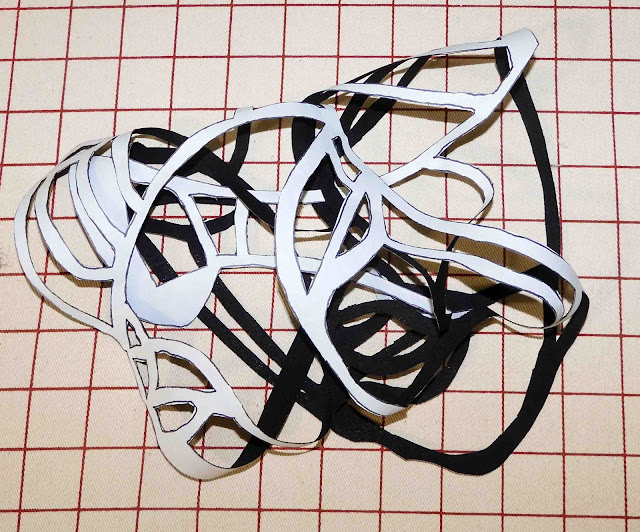 Open it up and flatten it out, and it looks like this: 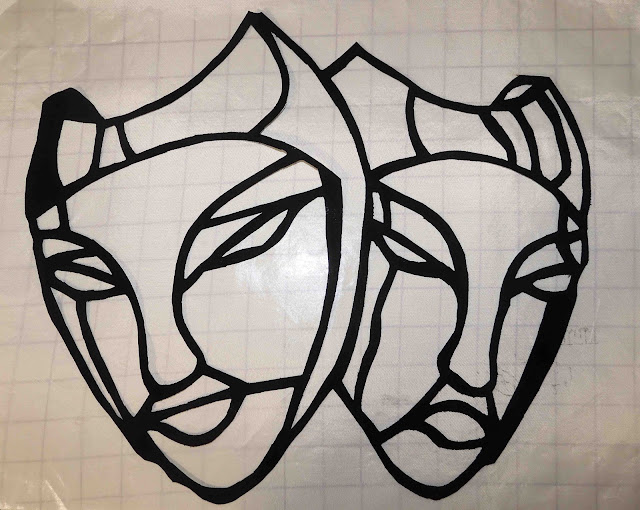 From there, I chose the fabrics I wanted to use for the "stained glass." Batiks work best for this. 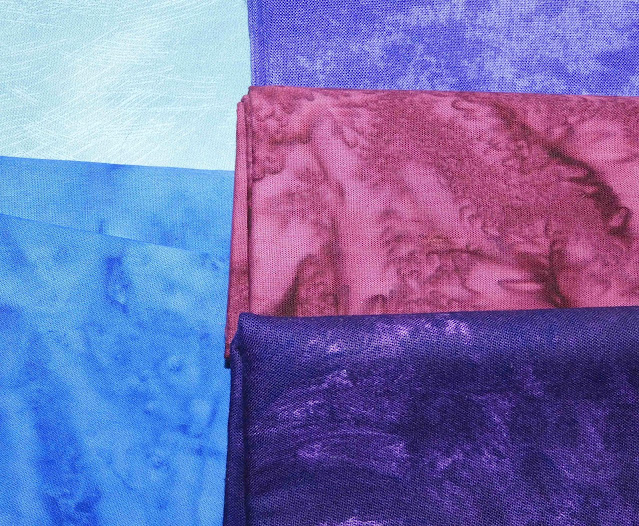 And then, I traced out the "glass" portions of the applique, giving a margin around the edges to be fused to the "leading." 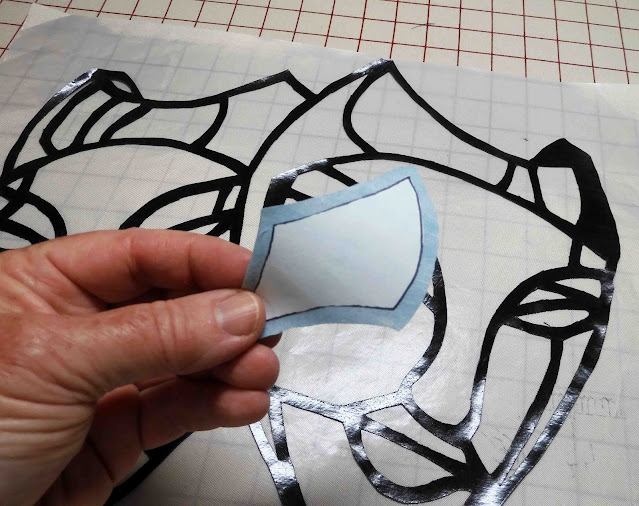 The challenge is to get complete coverage while still leaving enough fusible for the adjacent pieces. 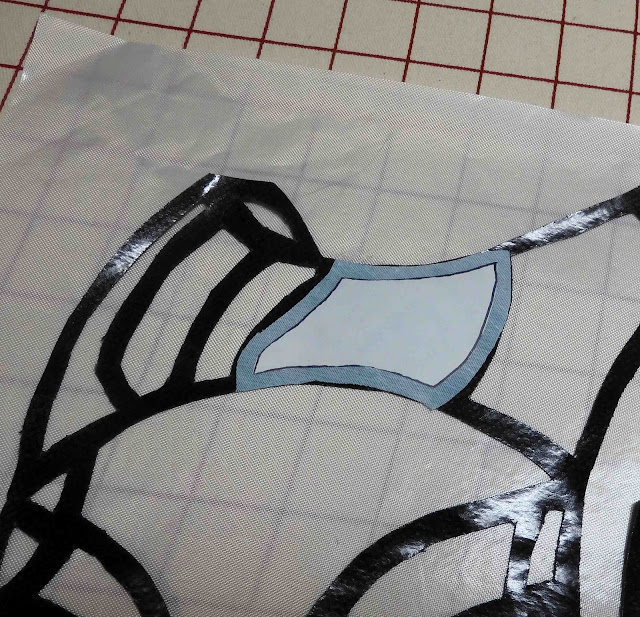 This is the one and only use I've found for this little craft iron. For this, it is an indispensable tool. 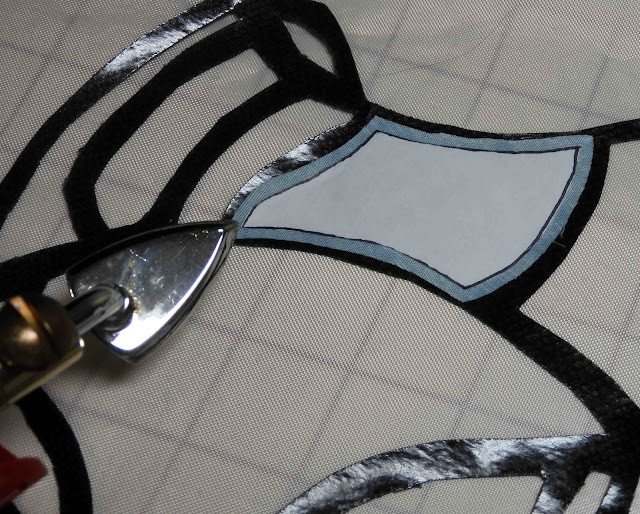 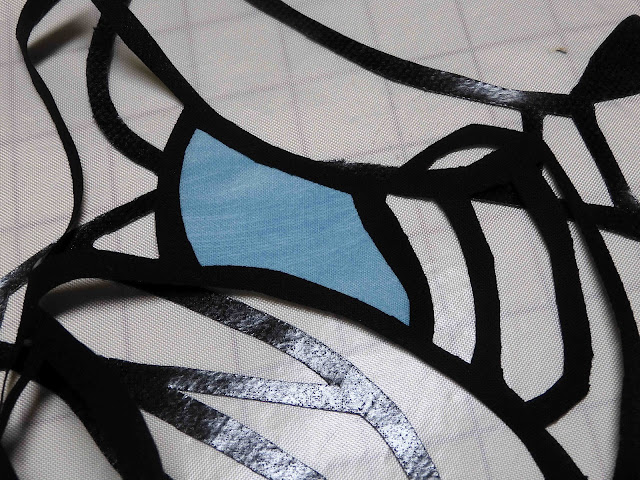 Okay, and then I continued on... 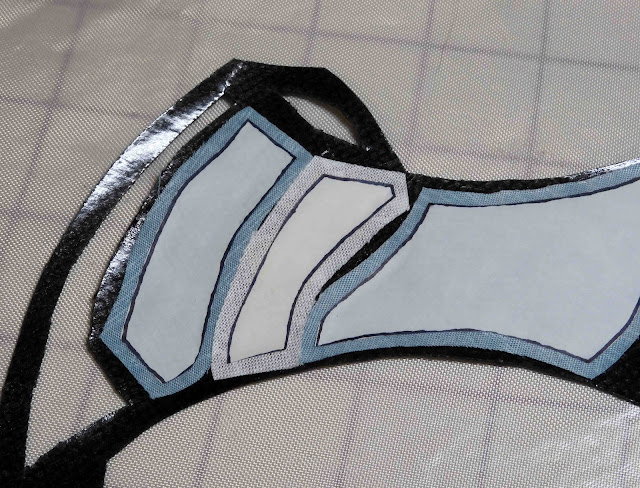 until I had complete coverage. 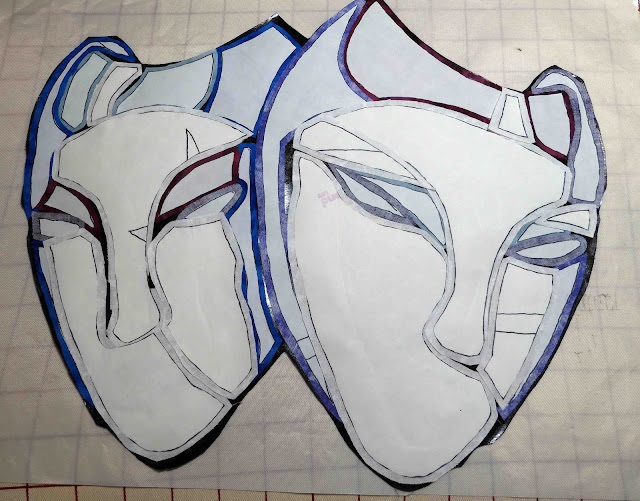 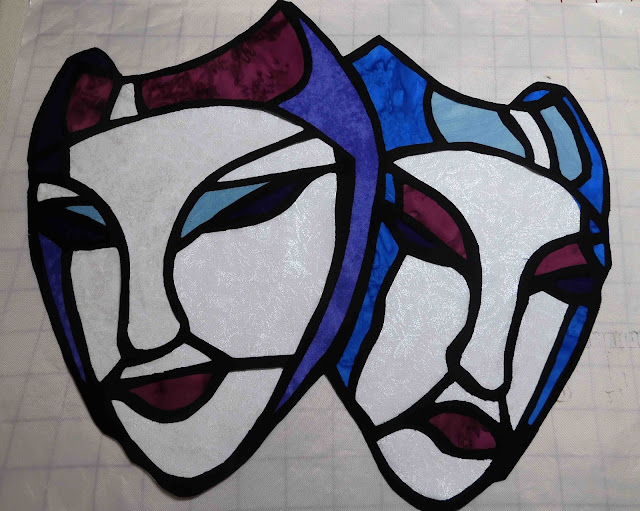 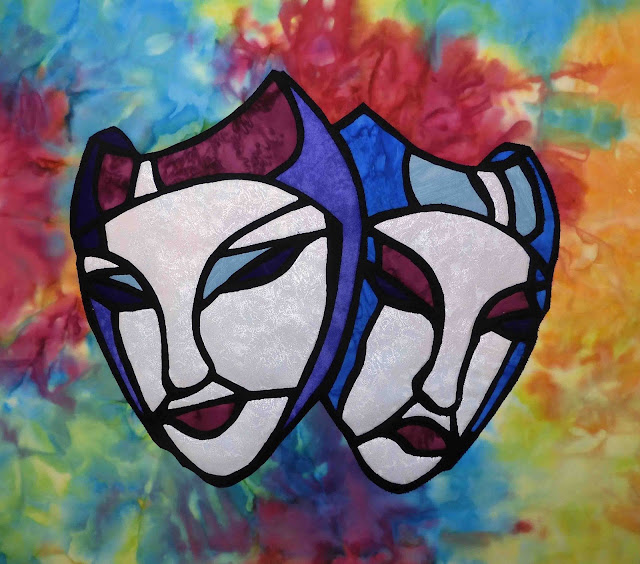 And now, I finally had a use for this piece of fabric I purchased long ago. 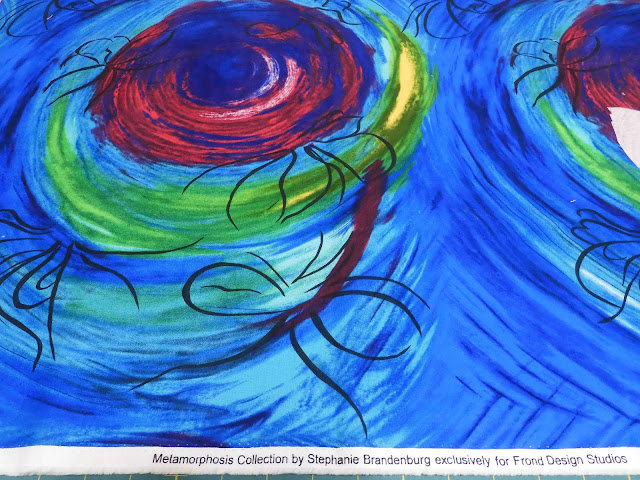 Originally, I was trying to recreate this block created by a kindergarten student. I wasn't sure how I was going to do that center rainbow, and so I went in search of a fabric that might work. 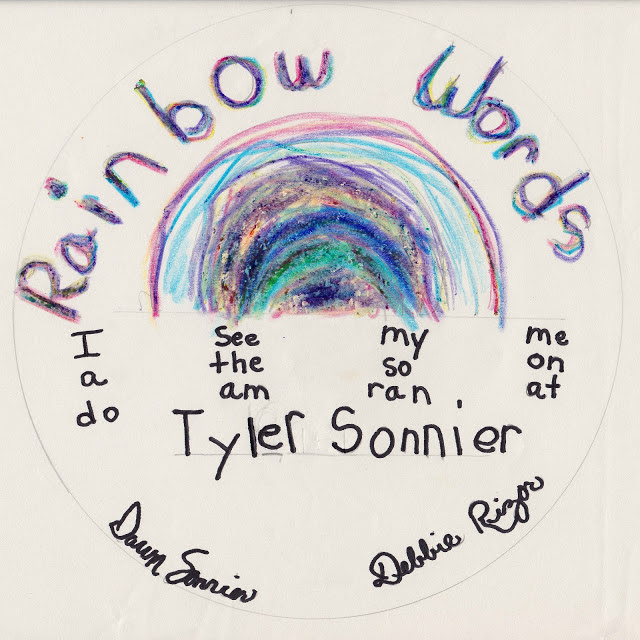 It wasn't a perfect recreation, but it was good enough. 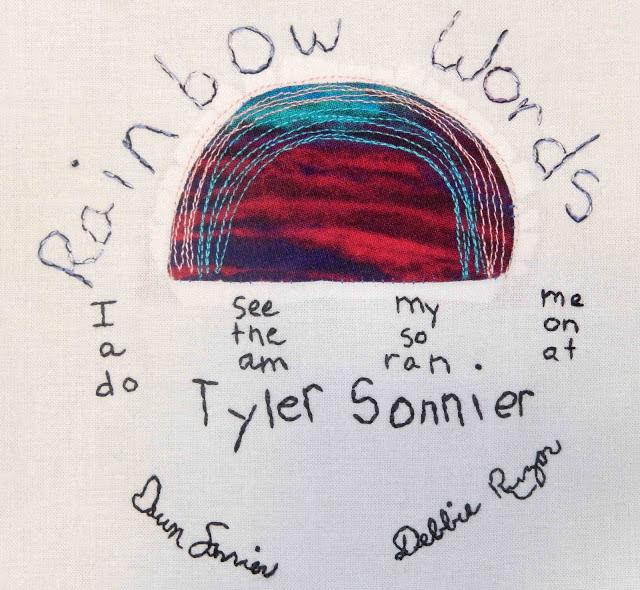 And there's the piece I cut from it originally. Aside from that I had a yard of fabric still intact. 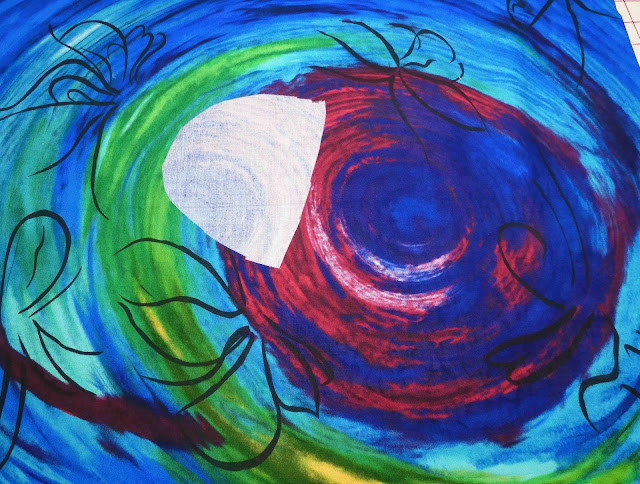 Quilting for these stained glass pieces consists mainly of top-stitching both sides of the "leading." It recreates the pattern on the quilt back. 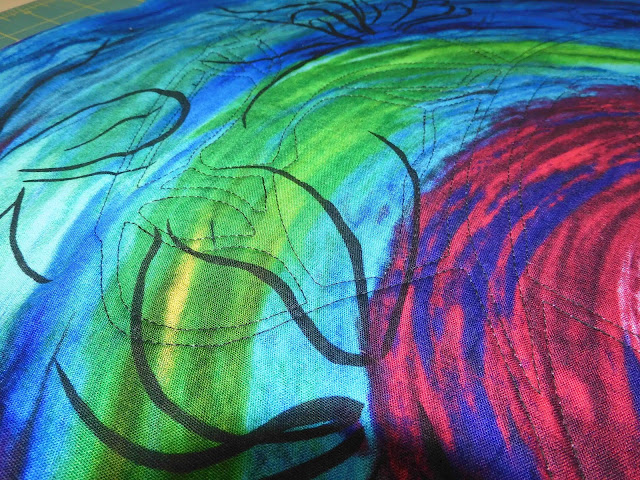 All that was needed then was to add a binding, and my quilt was finished. 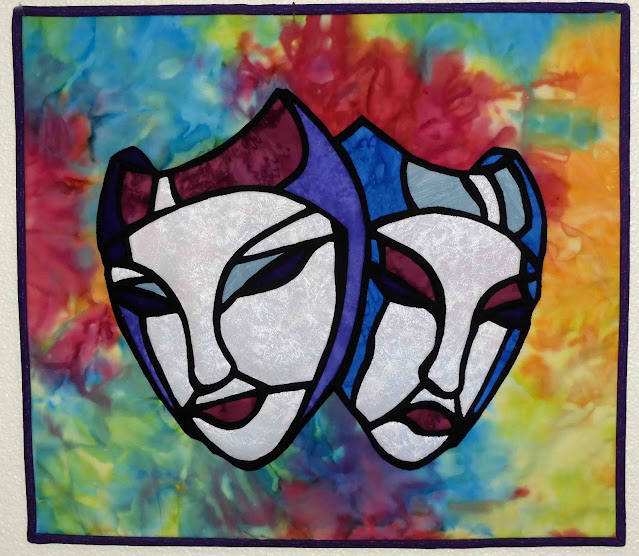 Opposites attract: Tragedy and Comedy. Certainly I saw plenty of that in my work. Retirement is good. I hope you like my quilt.
Posted by Barbara at 13:00