Well this was another really wide theme that could have gone in a million directions.  Right from the beginning though, I knew I wanted to do something with gravity.  I'm always amazed how weak a force it is and how strong a force it is.  Weak in that we can jump and lift things and throw things and strong in that it can tear planets and moons apart.

So I came up with the idea of doing something based on Saturn and showing how the might of Saturn breaks its moons and captures the pieces in rings.

I used a collage technique I had learned in a workshop with Kim Caskey, teaching a Laura Heine pattern.  You use steam a seam to bond fusible to patterned fabric and cut out flowers and motifs to use to build a collage. The technique is explained really well in Laura Heine's patterns so if you are interested in collage look her up.  She has some fun patterns like roosters, camper vans, and bees.

I drew out the shape of Saturn and some rings on Pattern Ease (a background material you can build collage on and leave it in your project).  I had fabrics already fused left over from another project and I wasn't sure how to do Saturn's ring so I pulled everything out and had a play.  I thought these circles would work as abstract impression of the rings so gave it a go. 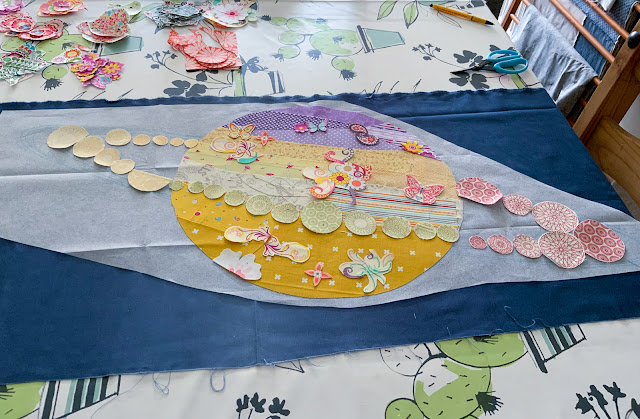 Instead of making the whole planet from motifs I used blenders from my stash.  I pulled some yellow and purple fat quarters and used strips and larger pieces to give the impression of Saturn and then added some swirly motifs on to show the gaseous nature of the planet. 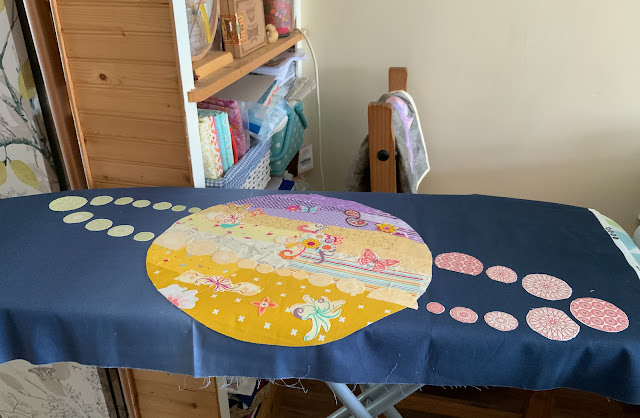 Over to the ironing board to fuse everything down. The thing with steam a seam is you can move the fabrics around and they will stick to each other until you press them.  When you press them on to where you want them then they fuse but the glue can be sticky when trying to quilt through.

The trick is to press using steam to release all that glue and to use lots of steam, then the free motion quilting of the planet was easier and I just echo quilted around the rings and planet with a walking foot to give the impression of the gravitational pull that Saturn creates.

This was a lot of fun and I was glad to re-visit this collage style of quilting.  Now to find some where to hang it.  It's getting crowded on the wall now with all the art pieces we have been creating!