I was feeling very smug when this quarter's theme was announced, as nearly two years ago I bought a postcard in a Dundee Museum of a colour chart from Munsell's Colour System to base my quilt on when this theme came up. Well, I wasn't feeling so smug when I started reading up about the system and thought about how that could be replicated in a quilt! I pretty quickly realised that producing a quilt based upon Munsell's system and to do the theme justice was never going to happen, so instead I looked beyond the scientific theories and systems ascribed to colour and went back to basics. 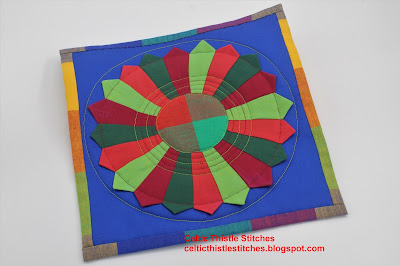 I thought about the sayings relating to colour that I have grown up with, the most quoted of which was "Red and Green should never be seen, except upon an Irish Queen" and decided to put together a Challenge quilt that broke the rule! My Rule Breaker quilt has 10 Red and 10 Green fans alternately arranged in a circle, with a red and green centre that mixes both red and green in two of the quarter circles - very daring :)

It seems that whilst I thought that the Red and Green rule was pretty universal, there are others who maintain that it is blue and green that should not be seen so I placed my red and green Dresden Plate on a blue twill background to break another rule at the same time! 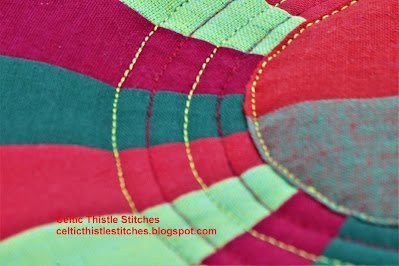 The Dresden plate was quilted with red and green thread in concentric circles to carry on the theme :)

I admit to being biased but I think the red and green combination looks rather well, so I am not sure that I agree with that old saying.

Head on over to Celtic Thistle Stitches to find out more about my Rule Breaker quilt!