It was difficult to pin down a project for this quarter's theme "Memories" as there are just so many memories to choose from. In the end though I didn't pick any of them! 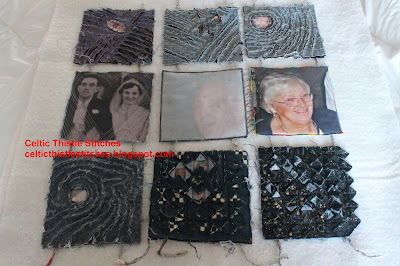 Instead I chose to base my Challenge project on the loss of memory that Alzheimer's caused for my Dad in the last couple of years of his life. Lost Connections is my representation of the confusion and withdrawal that my Dad experienced as his memories of his life and the people in it started to disintegrate.

The strongest connection that my Dad retained was, naturally, to my Mum to whom he was married to for over 64 years so she is shown as clearly as she appeared to him every day. Their wedding day is also clear in his memory as he always knew who my Mum was to him no matter what else he lost. 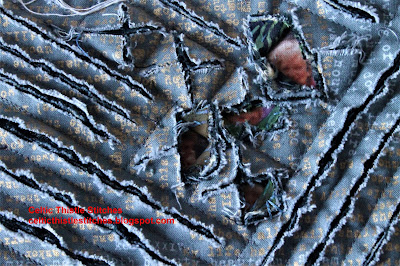 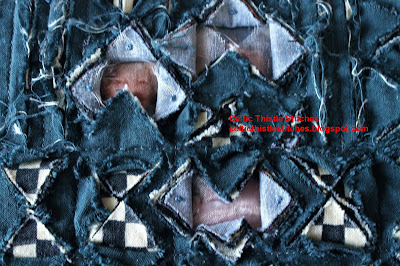 I revisited Ann Small's Layered Cloth technique for this quilt, so these two blocks are photos of my Mum and Dad with our children (top) and myself,our son and grandson (bottom) hidden behind layers of slashed and torn fabric. Again my Mum was a clear memory for him but his grandchildren less so, and his great-grandson was a connection that he struggled with. Our second grandson was born a few weeks before he died so he never actually met him, but was very pleased to know and make the connection with the inclusion of his own name in our grandson's given names. 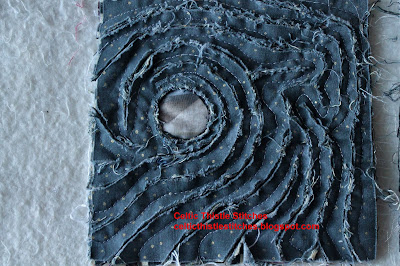 One of the places that my Dad often retreated to in his mind was the Inner Hebridean island where his family came from so their farmhouse home is the backing photo for this block. The place was, however, more of a sense of home rather than a bricks and mortar building so the photo is hidden behind a layer of organza and is only glimpsed rather than in full view. 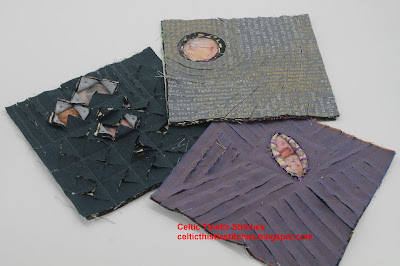 The next two blocks, shown here pre-washing, were built upon photos of my parents more recently at our son's wedding (top grey) and out for a coffee (purple) on a sunny day after we moved to the same town. In both of these blocks the main reference point for my Dad was as always my Mum, so the fabric is slashed and stitched back (the purple block) to reveal her. 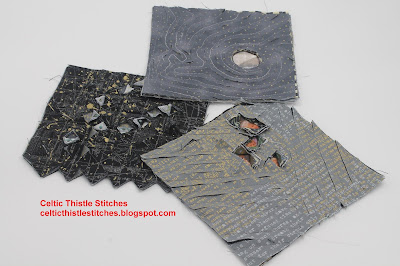 The final block of the quilt (seen on the left above) has no photo behind it and in places the fabric has been slashed through all of the layers. It portrays those memories that have been irretrievably lost already. 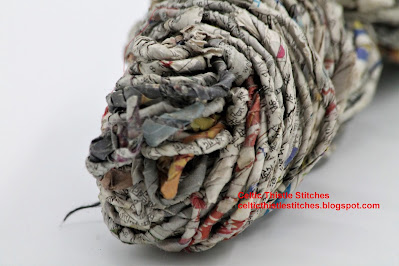 When I came across this weird and wonderful Newspaper Yarn on Oliver Twists website I knew that I could use it in this quilt collage! So, as images provoke memories so do words but again with Alzheimer's they can get lost or confused in the transmission. 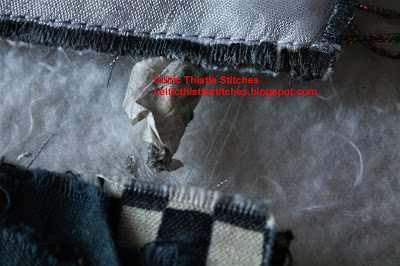 I used the Newspaper Yarn to connect the quilt blocks vertically but left the ends loose and frayed and when one of the strands snapped as I was stitching I left it in place as another lost connection. 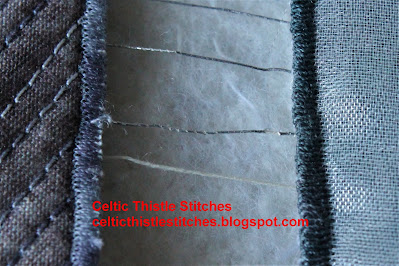 Similarly when the metallic thread that I used to connect the wedding photo to the central block began to fray from the core I used it to represent another connection beginning to unravel. 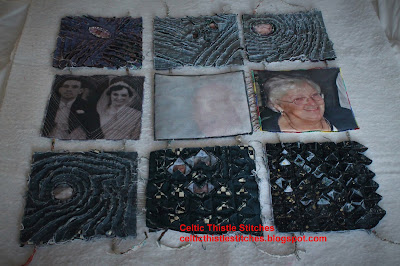 I never know at the start of each quarter where these challenges will take me, and this one, in particular, took a very surprising direction. I am, however, immensely grateful to both Janine and Catherine for organising this group and giving me the opportunity to flex my quilting muscles in ways that I would never have thought possible!

Looking forward as always to seeing how my fellow Endeavourers chose to present their Memories in quilt form :)