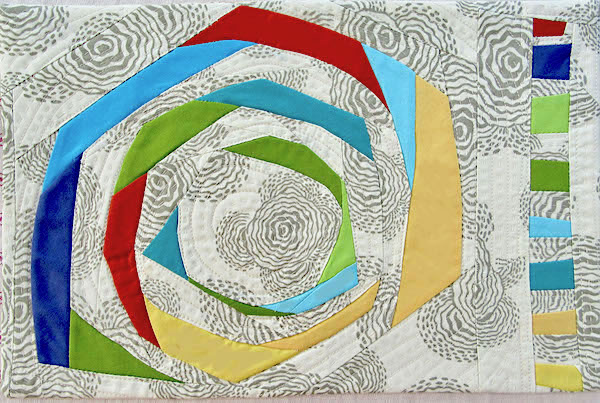 Welcome to another Endeavourers Reveal Day. Can you believe we've been going for a year now?

Of the challenges we've had so far, I found this quarter's theme - Improv - the most alarming! It wasn't really the techniques I found daunting as I've made a fairly wide variety of improv bee blocks over the years but I struggled with having no concept to work with and, being given to illustration, I decided that, this time, I would make a quilt that was NOT pictorial and did not involve any kind of story. A quilt that was just improv and nothing else.

I thought it best just to plunge in so I selected some newspaper fabric scraps and a bunch of very small solid squares. This rather limited my options but it did make randomly selecting and sewing together pieces until I'd made a block less out-of-comfort-zone than it might have been because they were always going to look ok together. Nevertheless I found myself with an ugly block, which really didn't seem to me to compensate me for the time and fabric used making it. It was only when I realised it might make a nice horse blanket that I started enjoying this little quilt so I finished up my first practice piece, happy to have accomplished it but having failed to avoid sewing up another picture... 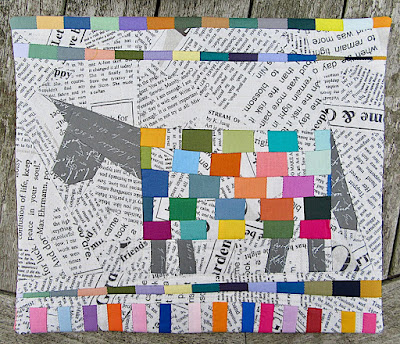 Next I thought I'd try some curves and, almost before I knew it, I had fish! 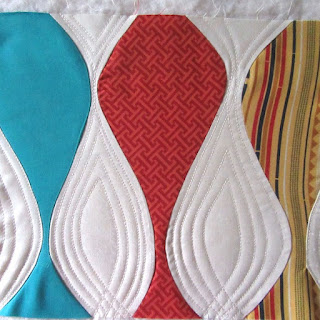 Or perhaps vases...I liked the fish/vase idea so much I embarked on a block with an improv background (hard to see in the photo but a variety of of tone on tone whites and creams). 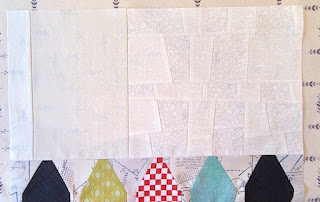 And I made some improv-ish flowers made from slashing a pile of roughly 5" squares into to wedges and sewing them together.

And this was actually my favourite improv experiment but I found the fish too curvy for improv curves so I made a fish template and I drew round a circular coaster for the flower applique so I ruled it out for the challenge and continued with some blocks that were not at all improv... 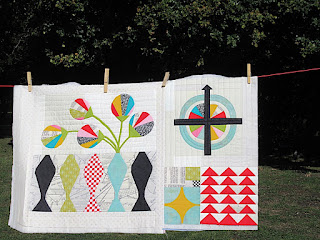 For my third attempt, I selected a piece of background I've had for years and some solid scraps and decided just to go round and round with improv curves. 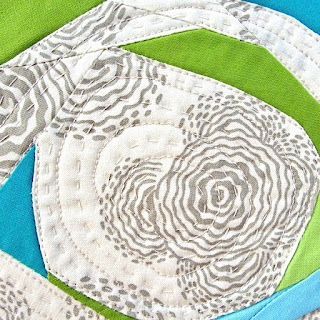 To start with, I envisaged a spiral but once I'd done the centre I couldn't see how to accomplish that and I didn't want a ring so I made nesting 'C' shapes instead... 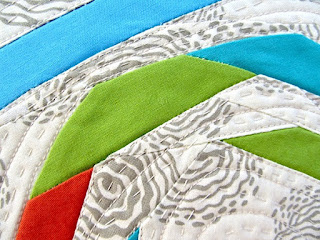 ...and just went round and round until I had too little background fabric for another round. To finish it off, I used leftovers to make a row of improv 'squares' and then squared up the whole thing. I bagged this quilt as I hadn't sufficient fabric for binding and I didn't want to introduce more of the colours.

Finally, I quilted by stitching in the ditch and adding lines of machine and hand stitching. 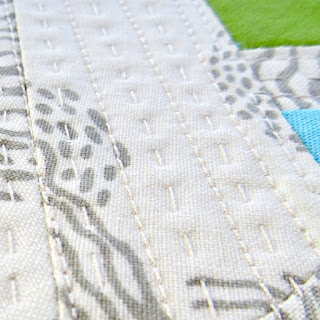 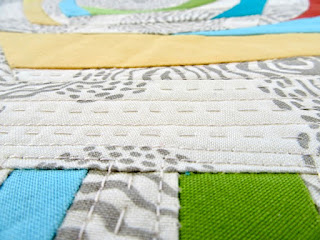 I finished this up early in the quarter and I planned to try out some more improv and, perhaps, make a better quilt but, sadly, I found myself without a sewing machine for a time so I am thinking of this as third time lucky!

I'm very much looking forward to seeing what everyone has made for this very tricky theme :)
Posted by Janine @ Rainbow Hare at 10:00